The Oceano redevelopment initiative was originally undertaken in 2018 under the aegis of the Oceano Beach Community Association (OBCA) https://oceanobeach.org/. In early 2021, the initiative separated from the OBCA to form the Oceano Economic Development Council (OEDC) as an independent nonprofit organization working with Cal Poly’s City & Regional Planning Department and Business School as well as other possible university departments in the future.

In addition to Cal Poly’s City and Regional Planning Department and Business School, the OEDC is working with the Promotores Collaborative of San Luis Obispo County  https://cfsslo.org/promotoreslo/ whose director, Erica Ruvalcaba-Heredia, is now seated as one of the OEDC’s nine slated charter members. This is a vitally important working relationship for the OEDC to cultivate, with roughly half the Oceano’s population being Latino. The OEDC intends to engage as fully as possible with Oceano’s Latino community. On a related note, the Oceano Advisory Council’s Latina chair, Allene Villa, is also a charter OEDC member. 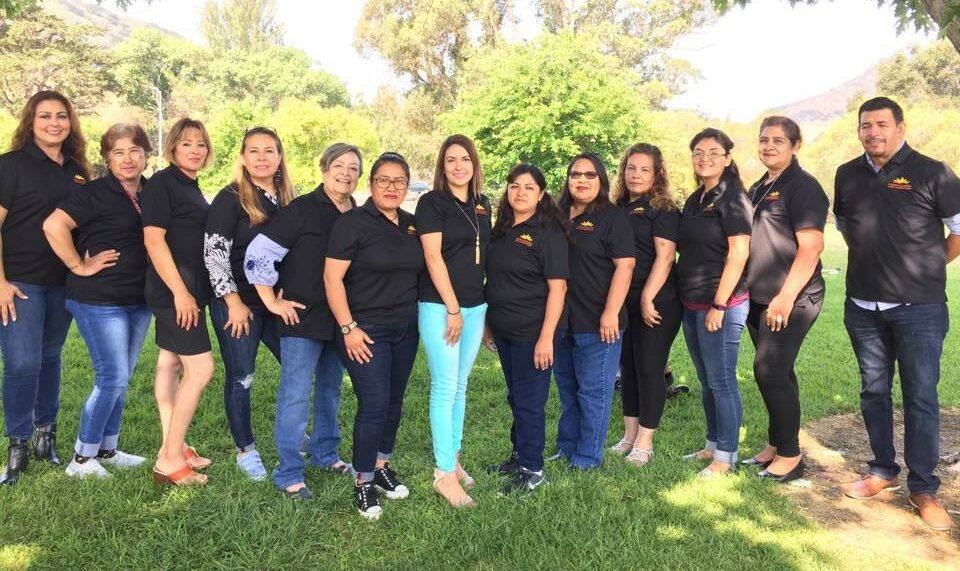 Building on accomplishments to date with Cal Poly’s City and Regional Planning Department and Business School, the following is a rough timeline of concepts the OEDC is currently focused on, all of which are subject to change based on outcomes of a community-wide land-use preference study and preparation of a follow-on strategic plan by CRP graduate students during the 2021-22 academic year. Learn More 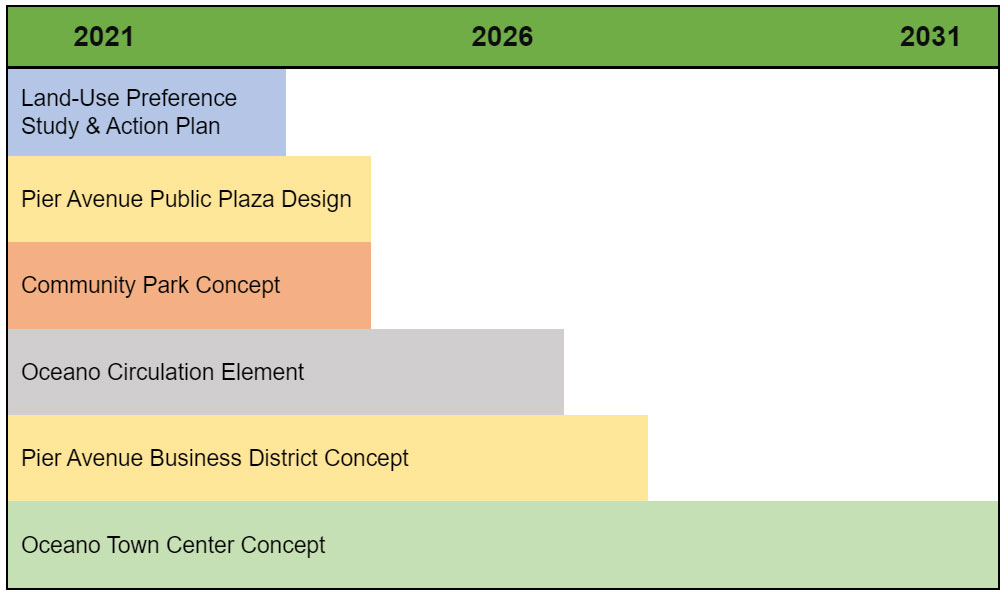 The OEDC is an outgrowth of an initiative begun by area residents who formed the Oceano Beach Community Association (OBCA) in February 2018 “to create positive change for Oceano.”

For decades Oceano has been in need of capital improvements while its infrastructure lapsed into a general state of disrepair and its economy suffered from a lack of jobs and stimulation. Multiple County studies and community plans were undertaken over the years offering residents hope and setting expectations for change, only to be discarded in the County’s ordering of its fiscal priorities. This has left many feeling left out and hopeless about Oceano’s future as well as distrustful of its governing authorities, especially among Latino community members, who make up half the town’s population.

The State has defined the term “disadvantaged communities” to mean communities that have been “subjected to disproportionate impacts from one or more environmental hazards, socio-economic burdens, or both….and whose residents have been excluded in policy setting or decision-making processes and have lacked protections and benefits afforded to other communities.”

More specifically, the State has defined the term to mean census tracts where aggregated household incomes are less than 80% of area or state median income, which is the case with Oceano as determined by the California EPA’s screening tool for identifying disadvantaged communities.

As a disadvantaged community, Oceano was designated an Opportunity Zone by Governor Brown in April 2018, giving Oceanoans hope of attracting private capital for a comprehensive redevelopment initiative undertaken by area residents. Such an initiative would address key issues relating to land use, sea level rise and social justice along with jobs and housing.

In a series of community workshops led by Cal Poly graduate students in 2018-19, Oceano residents voiced their aspirations for job creation and prosperity in their town. Latinos make up more than half the population in Oceano which has the highest rate of joblessness in the County.

In the first of these, CRP students met with residents in Oceano for a series of four workshops beginning in the fall of 2018, leading them progressively through a process that culminated in the preparation of a community plan update in March 2019: https://planforoceano.wixsite.com/oceano/8th-project.

The second planning studio picked up where the first left off, with a series of projects that included two concept plans for seaside developments along the lines of what Oceano’s town leaders had in mind back in the early 1900s when they aspired for Oceano to become a board-walked Atlantic City of the West with a town center near the seaside where the Oceano Airport is today. As concept plans, their main purpose is to inform a community-wide  land-use preference study of Oceano residents in the near future. 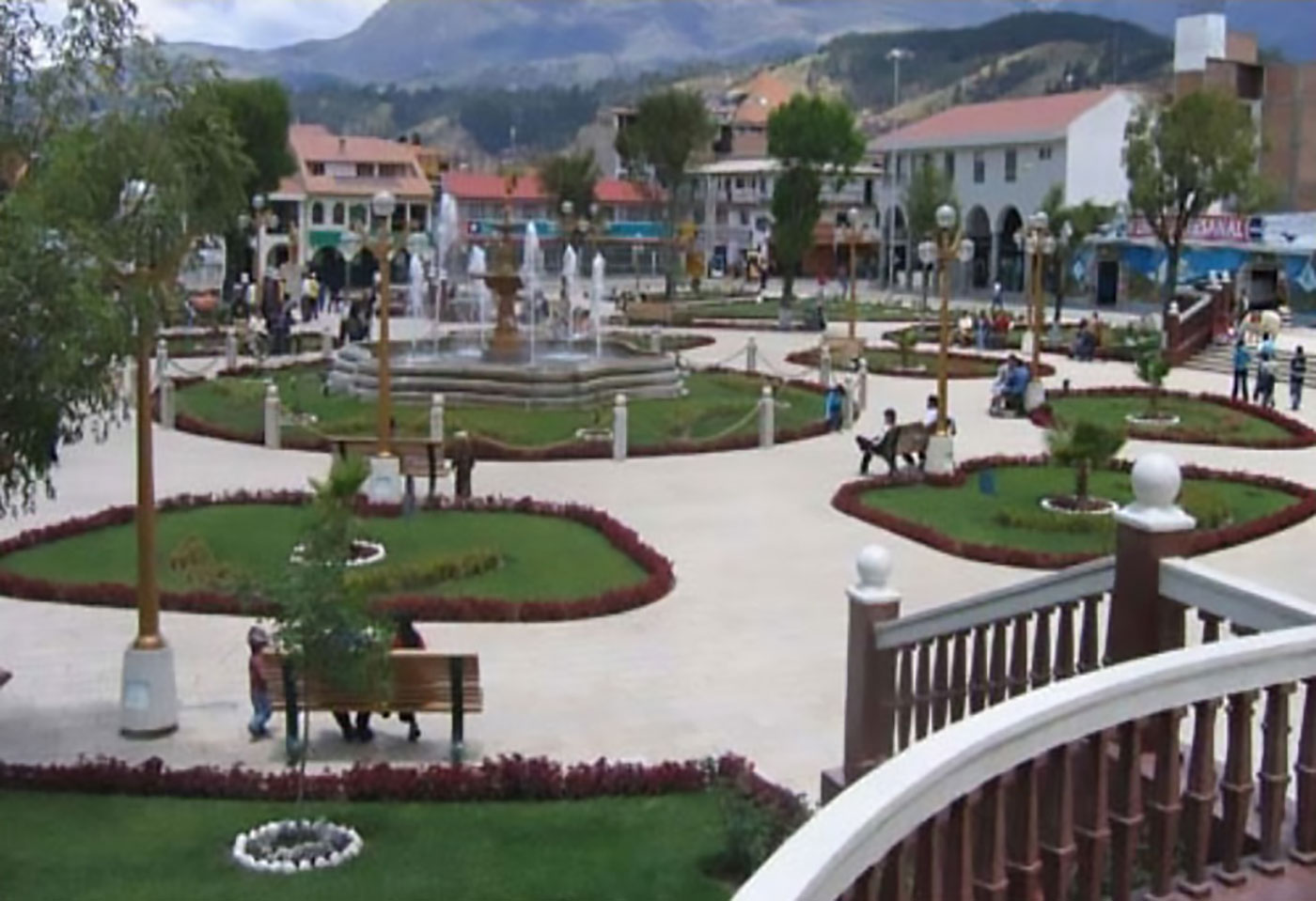 The two concept plans (referred to as specific plans below) establish models for the redevelopment of Pier Avenue as a visitor-serving business district, and the Oceano Airport as a town center, with a mix of commercial, residential, educational, and cultural/historical land uses. 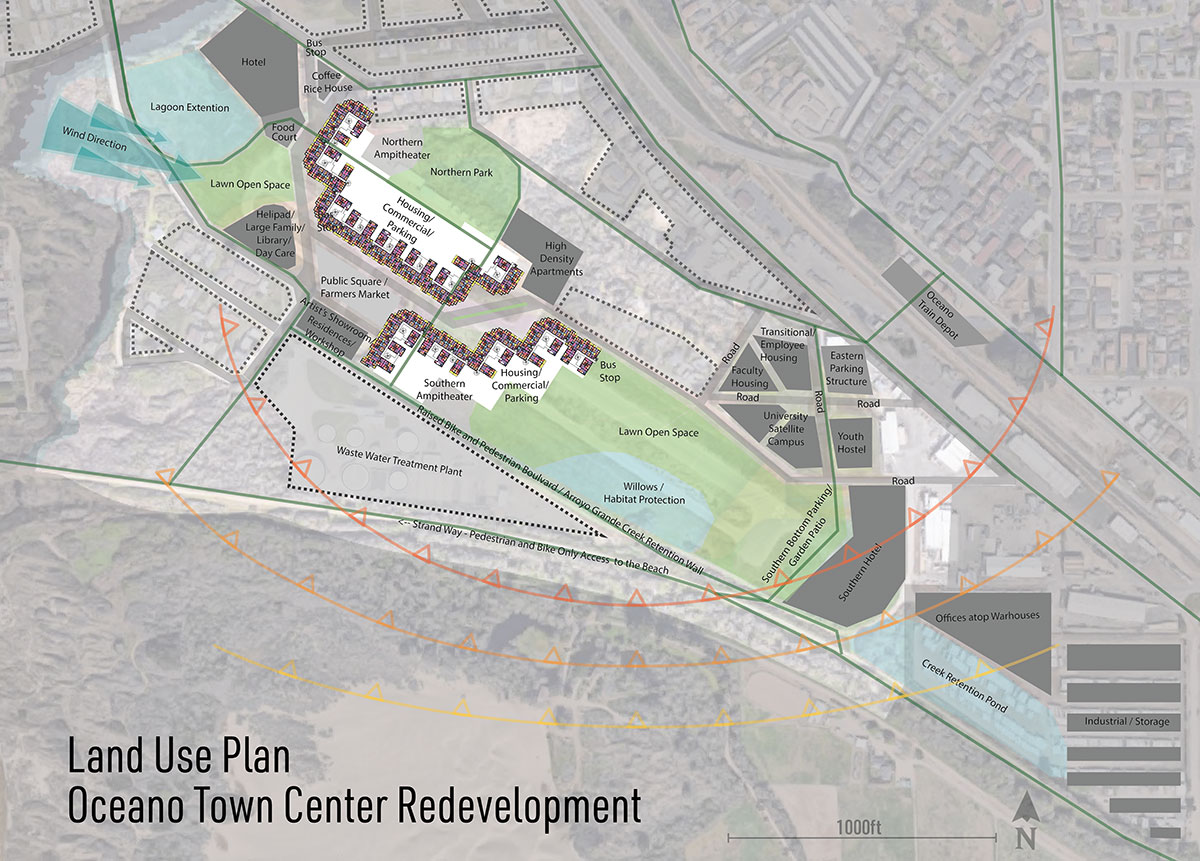 This economic modeling is being used to inform a community-wide land-use study with Oceano residents, asking about the kind and mix of redevelopment they’d like to see, while showing them what might be possible in terms of job creation, housing and improved living conditions.

The sole purpose of the design modeling and economic modeling being done for the Pier Avenue and Town Center concept plans is to assess prospects for redevelopment, not to promote any particular model or even these specific ideas for redevelopment.

The Council is presently engaged with Cal Poly’s City & Regional Planning Department on the implementation of a land-use preference study and the preparation of a follow-on strategic plan by CRP graduate students during the 2021-22 academic year. Overseeing the study is a Project Advisory Committee of more than 20 members drawn from 14 stakeholder groups: Learn More Here.

While the OEDC is chiefly concerned with Oceano’s long-range prospects for business development, it is now exploring more immediate ways to stimulate business activity by attracting more pedestrian business on Pier Avenue to offset the anticipated loss of the off-roader business occasioned by the Coastal Commission’s March 2021 decision to close Pier Avenue as a vehicular entrance to the beach by July 2022.

Example of a Pismo Beach cul-de-sac with no beach entryway,
public plaza or boardwalk connection

Given the urgency of this concern among local businesses, the OEDC is currently exploring with Cal Poly’s City and Regional Planning Department the possibility of conducting a community-based design study for a Pier Avenue cul-de-sac and public plaza with pedestrian beach access. Such a plaza could be designed to connect to a State Parks proposed boardwalk between Pier Avenue and Grand Avenue in Grover Beach that would link to campsites between Pier and Grand.

The OEDC is now also looking into the possibility of creating a new multi-use park near the downtown business district that’s easy for families and kids to get to. Such a park would meet an important unmet  community need for a safe outdoor recreation area in addition to attracting more pedestrian activity near downtown shops and eateries.

Plans for an Oceano town center date back more than a hundred years, siting its development near the beach on the present-day Oceano Airport property. A subdivision map for the development  features  a brick fountain centered in a park surrounded by shops and dwelling units. 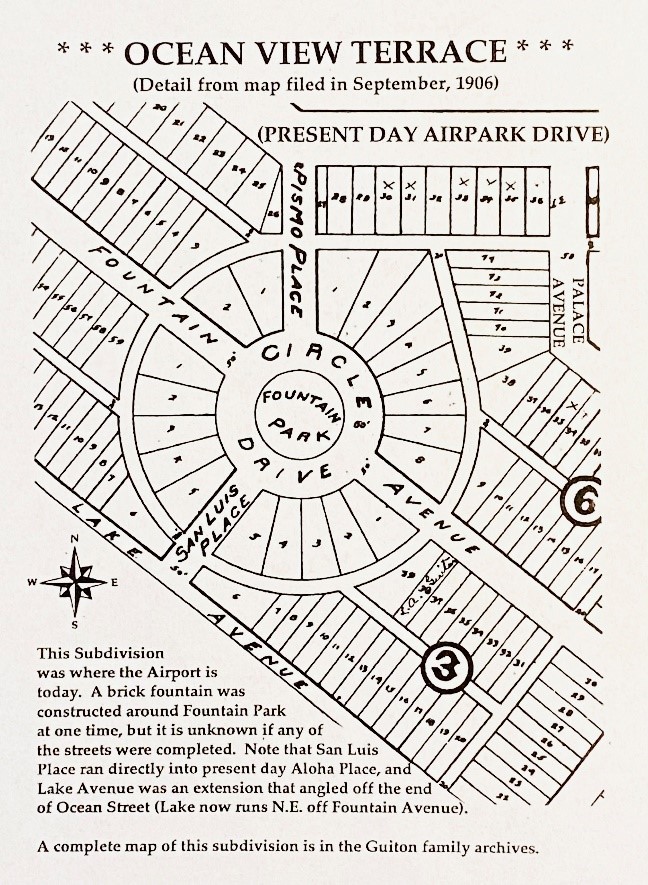 As far back as 1906 the town aspired to become a visitor-serving tourist attraction, with the Oceano Chamber of Commerce dubbing the town the Atlantic City of the West in the 1920s.

Over the years the dream of becoming a booming tourist town faded under the County’s reluctance to implement community plans and much-needed capital improvements (as documented below), and with the State’s 1982 permitting of recreational driving on Oceano’s beachfront, even as neighboring Grover Beach and Pismo Beach flourished with their vehicle-free beaches.

Horse and buggy beachfront activity in front of the La Grande Pavilion ca. 1905

Recreational driving on Pismo State Beach and in the Dunes became commonplace as far back as the early 1900s. Dune buggies came along in the mid 1900s, followed in more recent years by ATVs and RVs along with the throngs of street-legal cars and trucks we see today.

Interestingly, the County has never explored what the economic prospects might be for Oceano and the County if Oceano were to become a visitor-serving beach community, especially given its unmatched shoreline and dunes; its unique Dunite history of art, photography and literature; its rich cultural diversity, and its agricultural roots. Many residents wonder about it, especially in the Latino community.